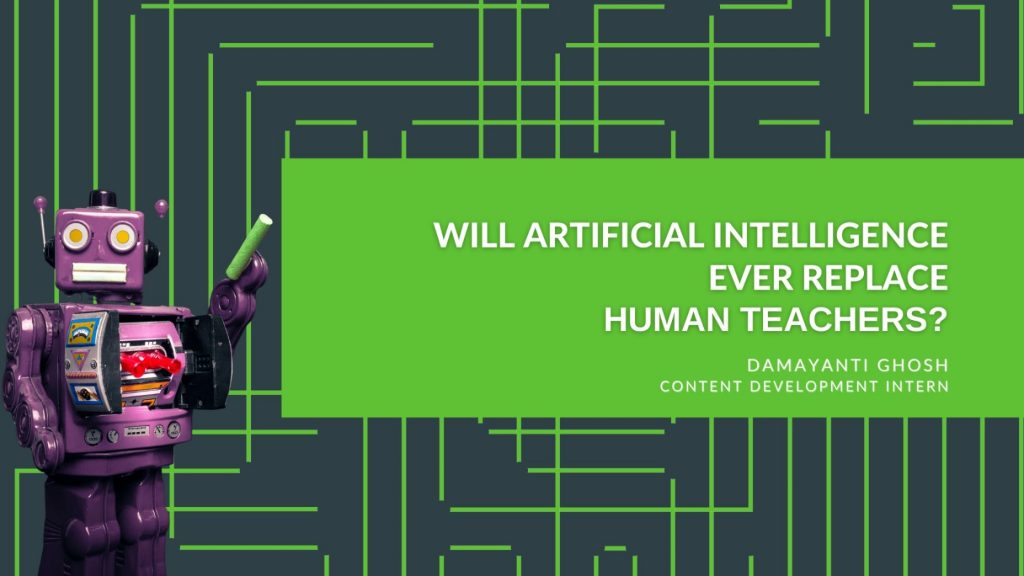 Anything new sparks our interest and opens the floodgates for debates. Naturally, when scientists introduced the idea of Artificial Intelligence (AI) taking over the education domain, many people felt that this might be the end of in-person classroom teaching.

They overlooked a central concern- does AI have what it takes to understand the emotional needs and feelings of the students? It sure might be the “New Omnipresence” and can answer just about everything under the sun in no time. But is it equipped to build a warm relationship, like that of a human teacher?

In his, The Emperor’s New Mind: Concerning Computers, Minds and The Laws of Physics, Roger Penrose gives the literary folktale, The Emperor’s New Clothes, a twist. The citizens of Penrose’s undisclosed region are all awestruck by the launch of a supercomputer, ‘Ultronic’. With 1017 logical units, which is “more than the number of neurons in the combined brains of everyone in the entire country”, ‘Ultronic’ is the most intelligent entity ever.

But a 13-year-old boy, Adam, challenges its invincibility. When the creators invite the audience to ask ‘Ultronic’ any question under the sun, they hesitate, afraid to seem stupid before the crowd-and before the New Omnipresence. However, Adam dares to ask what ought not to be asked-how the computer feels about being a computer. To this, the computer comes up with an Error-404-Not-Found response, and its invincibility topples down within minutes.

Hardly anyone can match the intelligence of the AI entities. They are accurate and can even outperform the most knowledgeable of all human beings. This is the primary debate put forth to replace teachers with artificial intelligence.

However, educationists understand that no matter how accurate the content is, students forget it when they do not get to apply it in their everyday lives. Human teachers come to the rescue here. They know that the purpose of education is to prepare young minds for life. Through various teaching strategies, they make the students aware of how to go about life by practically implementing what they have learnt in class.

Apart from presenting the content to the students, the aim of AI-based learning is also to produce data-based results of the students’ progress. AI finds out what a student knows. This way it provides a personalized study experience to each student by finding out their strengths and weaknesses. But human teachers investigate the ‘why’ aspect of it-for example, why a student is not getting good marks? Why a high-performing student is suddenly missing homework? Their ability to put their fingers on the reason for their students’ weaknesses makes the learning experience worthwhile.

Despite rigorous planning, if you are a teacher you know things will not go according to your prepared script-be it mental or physical. At some point, you need to improvise. For teachers, merely knowing content does not suffice. To make their students understand the concept and keep it a long time thereafter, teachers constantly look for inventive ways. One way of doing this is by connecting dots between the content and real-life scenarios. AI may know a lot, let’s just say everything, but human teachers improvise a lot so that the content becomes comprehensible to the students.

While spending a large part of their lives in school, most students develop unbreakable bonds with their teachers. They feel safe, heard, and valued and regard their teachers as friends. Students feel comfortable having conversations around various topics with their teachers, which they might find hard to have with others.

While spending a large part of their lives in school, most students develop unbreakable bonds with their teachers. They feel safe, heard, and valued and regard their teachers as friends. Students feel comfortable having conversations around various topics with their teachers, which they might find hard to have with others.

Robots are pre-installed with content by their makers. They know it because the installed programs allow them to know it and conversely, what is not installed they do not know. There is no learning process involved. Human teachers, on the other hand, have been students earlier. This makes their relationship with their students all the way more special. They gain the knowledge from their teachers and pass it on to their students. By sharing insights about their own experience of their student-hood, teachers help students to navigate through the learning process.

Artificial intelligence might become a potent aide to human teachers. It can supplement the work of human teachers by carrying out the more technical tasks like grading, data-based assessment of a student’s progress, and keeping a record of their attendance. For teaching and learning experience to be effective with a proper balance of the two.